Agapé UK is meeting the needs of people around the world, working with a number of international partners. This includes our humanitarian work with the Global Aid Network UK (GAiN UK), and the wider activities of the Agape Europe and Cru global networks.

We offer short-term projects to far-flung destinations, and opportunities to go overseas longer term. Find out more below.

Exploring your questions about going global...

The world is full of suffering – what can I do to help?

Overwhelming, isn’t it? So much so, that many people just try to block it out and not think about it. Did you know that the word amusement means not thinking? A-muse-ment – a choice to check out. But if you are one of those, like us, who likes to live with eyes wide open and in truth, the grim reality of the world can be crushing. Sex trafficking, homelessness, refugees drowning trying to escape the horrors of war… what can one person do?

It might seem like your activity is a pointless drop in the ocean, but that is not true. One person can make a lot of difference – in fact it is usually one person who does make a difference. Consider Rosa Parks, William Wilberforce, Billy Graham… and there are usually key figures behind the key figures, who encouraged and mentored them. You never know the difference you could make! Even if your impact is not recognised on a grand scale, your actions can make a huge impact in the lives of the individuals you touch. Loren Eiseley wrote the famous “Starfish Story” to illustrate this fact:

One day a man was walking along the beach when he noticed a boy picking something up and gently throwing it into the ocean. Approaching the boy, he asked, “What are you doing?” The youth replied, “Throwing starfish back into the ocean. The surf is up and the tide is going out. If I don’t throw them back, they’ll die.” “Son,” the man said, “don’t you realize there are miles and miles of beach and hundreds of starfish? You can’t make a difference!”

After listening politely, the boy bent down, picked up another starfish, and threw it back into the surf. Then, smiling at the man, he said…” I made a difference for that one.”

What opportunities are there to go overseas?

The hope that Jesus offers is one that transcends culture and nation states; it has the potential to bring healing and peace, on a global scale, that nothing else in the world can! In the Gospel of Matthew in the Bible, Jesus’ very last words to His followers were an appeal to them to share this hope, not just with their friends and family around them, but with the whole world!

As the UK arm of an international Christian charity, with a presence in over 190 countries around the world, there are plenty of opportunities to go overseas with Agapé UK. For Christian students who would like a short-term experience (2-4 weeks) of what it’s like to help students from other cultures explore faith, Global Projects are the perfect answer.

Perhaps you are a Christian student who is considering spending a semester, or more, of your degree programme studying overseas. Agapé UK Study Abroad can connect you with local teams working with students in universities all over the world. We can also give you practical and cross-cultural training and connect you with a virtual coach in the UK to support you during your time overseas.

Or maybe you are about to graduate, or you’re just someone who loves talking with students about the deeper questions in life. Do you have a particular nation or people group in your heart, or to whom you feel led? If you’re considering the possibility of ‘going’ for a longer period of time, our Global Sending opportunities STINT (9-12 month Short-Term INTernational assignments) could be just what you are looking for!

Imagine an adventure that could change cities, countries and continents around the globe whilst also forever transforming your life; a summer that propels you into a deeper walk with God and gives you greater confidence in talking about the bigger questions in life with your friends; a summer that develops your leadership skills and begins friendships you’ll take with you for the rest of your life.

Are you given the opportunity to study abroad as part of your university or college degree? Perhaps you’re a foreign language student, preparing for your year studying abroad, or you’ve just discovered that your university offers an exchange programme; if that’s you, Agapé UK Study Abroad might just be the programme for you on your semester or year abroad!

Agapé UK Study Abroad has been developed to support Christian students to help you make the most of this great opportunity to study abroad, not just for furthering your education, but to help you as you discover Jesus together with students in your new university.

As an international Christian charity, we are active in over 190 countries across the world. We’ll try to connect you with an existing local Agapé student team in the university where you’ll be studying, and we’ll provide you with an experienced coach in the UK, who will train and support you during your time overseas. You’ll also receive support in learning to live in a new culture, as well as information and resources that can help people discover Jesus together.

Agapé UK Study Abroad is an opportunity for you to learn skills that will be relevant for you whilst you are studying abroad but will also last a lifetime!

Jesus’ final words to His followers were an encouragement for them to go and help others discover the good news about His resurrection – about His victory over evil and death – not just at home but with the whole world! As a study abroad student, you are in a unique position to be a part of this, and we, at Agapé UK, are excited to support you as you go!

Got your own question?

Let us know! We’d love to help point you in the right direction in future content and resources.

How I Ended Up in Siberia

Imagine an adventure that could change cities, countries and continents around the globe whilst also forever transforming your life; a summer that propels you into a deeper walk with God and gives you greater confidence in talking about the bigger questions in life with your friends; a summer that develops your leadership skills and begins friendships you’ll take with you for the rest of your life.  This is what Agapé UK’s Global Projects are all about. They’re an exciting adventure…

The Global Aid Network UK (GAiN UK) is the humanitarian aid partner of Agapé UK, dedicated to bringing hope and tangible help to those facing poverty and crisis. Responding to disasters around the world, we not only send aid but also go to the areas affected to be an extra pair of hands, serving on the ground. For example, we regularly send teams to one of the temporary hotspot camps on Lesvos, Greece, where thousands of displaced people are located.… 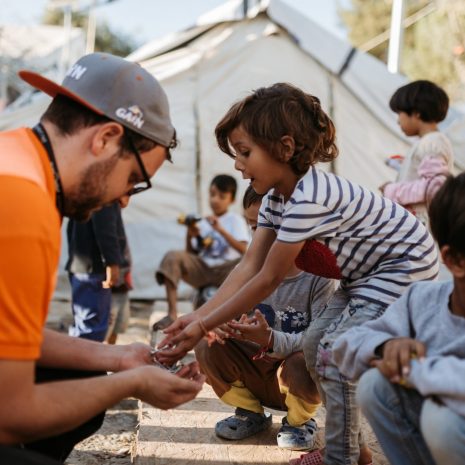 The Global Aid Network UK (GAiN UK) is the humanitarian aid partner of Agapé UK, dedicated to bringing hope and tangible help to those facing poverty and crisis. We seek to restore life and reveal hope through relief and development projects around the world.  Responding to disasters and relief situations around the world is made possible through resource bases which extend our compassionate reach around the globe. These bases are collection points for aid which we can then distribute to…

We stand at a unique time in history. The numbers of people choosing to follow Jesus are growing at unprecedented speed, especially in some of the traditionally most difficult parts of the world to be a Christian. Most experts believe that the Great Commission is within reach in our generation. How might we collaborate together to go to the nations? Would you join us, and can we join you, in helping to fulfil the Great Commission? Agapé UK (as part of…